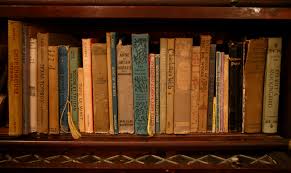 After three days of drinking I somehow managed to stumble back home, a ranch style house at the end of a cul-de-sac. Fumbling into my pockets I dug out the keys. The full moon cascaded a bright yellow hue onto the porch. It was then I realized the front light wasn’t on. Hmm.

I winced. My hangover pulsated, the pain intense as if tiny men chipped away fragments of my skull with pickaxes. I whispered, “Lord, if you make the pain go away, I promise never to take another drink.”

The door sprung open and I stumbled into the foyer. Without the aid of the moonlight, the dark house looked spooky. My fingers searched for the light switch. Imagine my surprise when they illuminated emptiness. I blinked several times to make sure my eyes weren’t playing tricks on me. It didn’t help. The couch was gone, the big screen TV. The walls were naked, where pictures once covered them.

I rushed to the study. My collection of beetles still remained. Each species still encased in their small glass enclosures hung along the wall. I collected my first species, the Stag beetle in 1979. My collection has since grown to over 500. I recently returned from Africa with my prized collection, the Hercules beetle.

I walked outside and called the police on my cell. A cool breeze mussed my curly brown hair.  My potbelly rumbled in protest for food. Ten minutes later a police car arrived. The door opened, revealing a very fat man. He made me look anorexic. As the big man struggled to exit the vehicle, one hand held onto the steering wheel, while the other rested on the gravel below, an attempt to maintain his balance. The vehicle reverberated when he managed to exit. I snickered.

He closed the door, adjusted his gun belt, and waddled over. The tune ‘Weebles wobble but they don’t fall down,’ played in my head.

“What’s the problem sir,” the officer asked, adjusting his brown hat, which matched his uniform. His nametag read Hardy.

“Someone broke into my house and stole everything except the kitchen sink. Well that and my beetle collection.”

“Did you say beetle collection,” he asked a bit surprised.

“Yes, I know it sounds weird, but everyone has a hobby. Mine happens to be beetles.”

He raised a brow. “Alright, let’s take a look.”

As we entered each room he wrote notes on a pad of paper. Without looking at me he asked, “Do you know of anyone who may have done this?”

“Maybe my ex-wife, but why break into the house and steals everything, except my most prized possession.”

“How long you been divorced?”

“Two years. It was mutual. She couldn’t handle my occasional drink and I couldn’t stand her OCD.”

“Uh-hum,” he said a bit pessimistic. “Does she have a key? There doesn’t seem to be any signs of forced entry.”

He tipped his hat. “All right. I have everything I need.”

“Aren’t you going to check for fingerprints or anything like that?” I paused. “You know … evidence.”

He stared at me. “Are you telling me how to do my job?” He put his notes away. “If you are, I have one question for you. Why does your breath reek of alcohol and did you drive home under the influence?”

I decided to plead the fifth. No reason to incriminate myself.

“Didn’t think so.” He wobbled back to his car.

Some help you are.

When I woke up the next morning the thumping had subsided. It was more like a dull ache. I walked around the house looking for any evidence, since Mister ‘I am the Law’ hadn’t. Two things struck me as odd. The walls were clean. There weren’t any outlines of dust where the pictures once hung. Second, the house was spotless. It didn’t make sense. Why go to all the trouble and leave my collection behind?

“This is Officer Hardy. I did some checking around and your wife has an alibi for the past three days. I’ll check back with you once I have more.”

“Thanks,” I said dejected and hung up.

“Wait a minute,” I whispered. “I never told him I’d been gone for three days.”

Curiosity settling in, I decided to drive by the ex-wife’s house anyway. After all I wasn’t feeling too confident in Hardy’s investigation abilities. With these new clues, I felt like Magnum P.I.

I drove by her house. A squad car was parked in the driveway. A few minutes later the front door opened. Officer Hardy. He stepped onto the porch, turned around and put his arms around my ex-wife. They kissed. A pain, akin to heartburn settled into my chest.

I’m not what you’d call handsome, but she definitely traded down. I waited till he left and snuck up to the house. I peeked through a window and saw some of my belongings. My wife sat on my leather couch as she watched Oprah on my big screen TV. I walked through the front door.

“I want my stuff back,” I demanded.

Surprised by my presence she asked, “How did you know?”

“You can’t control your OCD. The beetles always gave you the heebie-jeebies. And to top it off, your lover, Officer Hardy said you had an alibi for the past three days. I never mentioned anything about being gone three days.”

She put her head into her hands a cried.

Smiling I thought, Magnum don’t have anything on me.